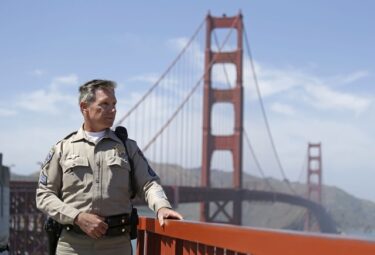 Guardian of the Golden Gate Bridge,

As an international Crisis Management, Suicide Prevention, and Leadership Skills presenter, Sergeant Kevin Briggs’ story and lived experiences have been featured at the Technology, Entertainment, and Design 2014 Conference as a TEDTalk, Ciudad de Las Ideas (Mexico), Yahoo News, The New Yorker Magazine, Men’s Health Magazine, NPR’s Bob Edwards Radio Show, People Magazine, USA Today, as well as other magazines, newspapers, radio, and podcasts across the world. His first book, Guardian of the Golden Gate: Protecting the Line Between Hope and Despair, was released in July 2015.
Briggs is a retired California Highway Patrol officer who spent many years patrolling the Golden Gate Bridge in San Francisco. While on patrol, he encountered numerous individuals clinging to life by a thread – individuals who had lost hope and could see no way out of their current situation – ready to jump off the bridge to what they assumed was a sudden death and ending of their pain and hopelessness.
Briggs, through his compassion, gentle voice, eye contact, and his innate ability of “listening to understand” encouraged more than 200 individuals over his career to either not go over the bridge’s rail or come back to solid ground from where they had been standing precariously out on the chord of the bridge and start a new chapter in their life. These challenging, but rewarding efforts earned him the nickname “Guardian of the Golden Gate Bridge.” After a 23 year career with the California Highway Patrol, Briggs retired to dedicate his life to promote mental health awareness across the globe through Pivotal Points, an organization he founded to promote Crisis Management, Suicide Prevention, and Leadership Skills.
Briggs speaks publicly about not having the right kind of professional training to effectively assist persons in crisis when he first began work as a patrol officer. Throughout his career, he reached out to senior officers who had been in the trenches, asking for their guidance – how to approach an individual in crisis, what to say, what not to say, tone of voice, among many other things. He sought various professional training avenues including hostage negotiator training to continue to improve his skills and abilities. Over time and using all the things he learned, Briggs found a positive way to approach people in crisis, using listening skills he practiced to find the “thread” that would encourage individuals to find hope for tomorrow and allow them to make the decision to live for another day. He is a mental health consumer himself – Briggs suffers from depression related to his highway patrol officer and work leader experiences (including a motorcycle accident in which he was severely injured), as well as losing his grandfather to suicide, and other personal and family experiences.
Today, Briggs is mapping a movement as he speaks publicly about his suicide prevention and crisis encounters with people on the bridge. He shares his “Listening to Understand” skills followed up with key active listening points for anyone to use; his personal triad for healthy living; his RELEASE model to assist anyone in crisis; his crisis plan, and his personal mental health struggles while serving in the Army, as a police officer, as a cancer survivor, as a family member and father, and as a leader and co-worker. Briggs spends the majority of his time speaking at training events, conferences, advocacy events and walks for mental / physical / behavioral health, college and university, first responder, law enforcement (including FBI), AFSP, NAMI, corporations, and other venues.
In February 2015, Briggs had the privilege of working in Australia with law enforcement, mental health organizations, and Mates in Construction, which works to reduce suicide in the Australian construction industry. During his time there, he conducted 22 presentations focused on suicide prevention.